A new bridge to cross the River Liffey is scheduled to be in place by 2023.

The Blood Stoney Bridge is planned as a facility for pedestrians and cyclists that would link Sir John Rogerson’s Quay on the southside, to New Wapping Street on the North Wall Quay on the northside.

A Dublin City Council (DCC) transport committee hearing heard that the opening bridge would allow a navigational channel on the Liffey.

The cost of the new facilities at Blood Stoney Road and Tom Clarke Bridge had a combined cost estimated at €31 million, and were first planned in 2012 as part of the North Lotts and Grand Canal Dock Strategic Development Zone. 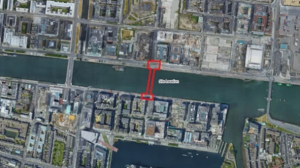