Dublin’s Docklands has undoubtedly become the hub of almost all the major international tech companies who have established offices in Ireland. Less than three months after moving into a substantial new building beside the Bord Gáis Energy Theatre, Facebook has agreed rental terms for an almost similar adjoining block, which will bring its overall office space up to about 23,225sq m (250,000sq ft) according to the Irish Times.

The social networking giant has been in Ireland since 2009 and is expecting to increase its staff numbers which are currently about 500. One of the reasons for their expansion is the availability of international talented staff here. The Dublin office is responsible for users of the social network site outside the United States – particularly markets across Europe, the Middle East and Africa. Its staff are involved in a broad range of functions from user operations, policy and safety as well as advertising and sales.

While it is currently acknowledged as one of the best office developments in the city, Grand Canal Square may have been seen as slow to shift during the recession but the reality is that the correct tenants have emerged. 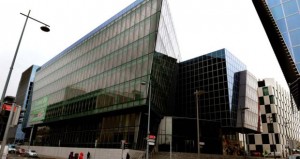