This run, organised in consultation with An Garda Síochána and Dublin City Council, will result in rolling road closures on Wednesday 13th November 2019 between 8.00pm & 9:30 pm. Please see below:

The following road closures will be in operation for Run in the Dark on Wednesday 13th November, 2019.

About Run in the Dark and the Mark Pollock Trust

Mark Pollock fell from a second story window in 2010, breaking his back; the damage to his spinal cord left him paralysed. Cruelly, this was not Mark’s first tragedy. 12 years earlier, he lost his sight. As the blind adventure athlete lay in hospital, now paralysed and broken, his supporters created Run in the Dark to fuel his ambition, to help him and millions of other paralysed people walk again. Run in the Dark now plays a vital role in funding Mark’s personal mission to cure paralysis in our lifetime.

This year the run is happening in Dublin, Cork, Belfast and London as well as some smaller events in 45 cities worldwide.

See the Run in The Dark website for more details. 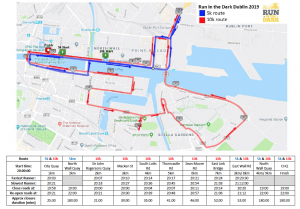