Docklands Chimney Park, an innovative children’s playground area and new community amenity, was opened by John Gormley, TD, Minister for the Environment, Heritage and Local Government on 19th June 2009. Developed by the Docklands Authority, the 1,479m2 (approximately) park is located at the base of the historic red brick chimney which gives it its name, near Grand Canal Square in Dublin’s South Docklands. 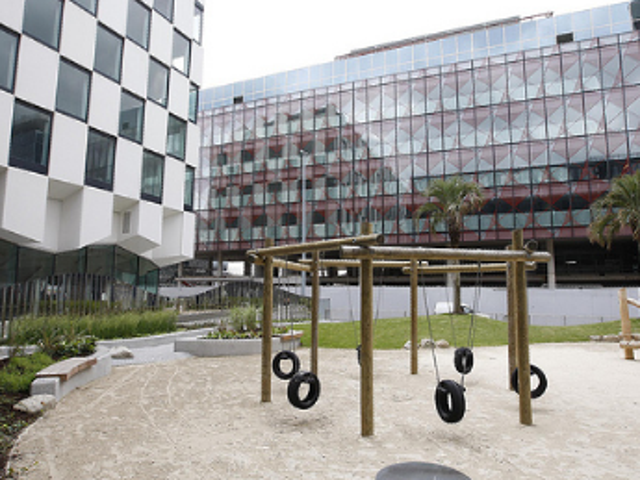 Throughout 2007, 2008 and 2009 a series of extensive consultation meetings and workshops were held with all stakeholders, interested parties and the appointed design team to research and address the hopes, ideas and concerns of all, regarding the Chimney Park space.

The innovative ideas generated during the consultation process have been integrated into the park with creative features such a mirror wall; a wobbly play platform; a water play feature; palm trees and a blue lounging wall. Children from City Quay National School also created a special poem ‘Talking Chimney’ that has been engraved into the seats throughout the park.

The Docklands Chimney Park design team was led by Healy Kelly Turner and Townsend and landscape architects LDA Design and the main contractor was SIAC Construction – a full list of consultants and contractors follows.

The courtyard garden at Hanover Quay has been designed by the famous Irish Garden Designer Diarmuid Gavin. It started its life as a concept-garden at the Chelsea Flower Show in 2005 where it confounded his sternest critics with its simplicity – and won a Silver Gilt Medal for its contemporary design. After Chelsea the garden took up its permanent home as courtyard retreat for the new Hanover Quay mixed-use complex in the Dublin Docklands. 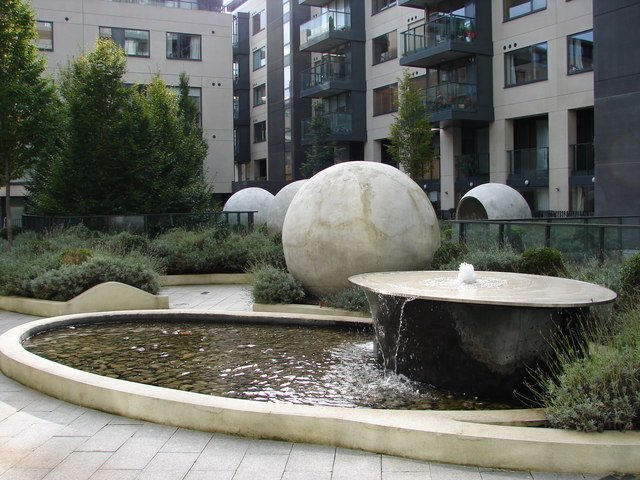 The garden is on three sides surrounded by 4-7 story apartment blocks. On the ground-and first floor of the northern block the offices of the Dublin Docklands Development Authority face onto the courtyard with more apartment uses above. All apartments as well as the office have their own private open space in the form of balconies or terraces for the ground-floor units.

Diarmuid Gavin also incorporated a childrens play area into the garden to encourage the younger residents to enjoy the many benefits of being frontage.

Gavin’s tranquil oasis is a communal space in a courtyard setting to be viewed from above as well as walked through. The garden design is all about shapes and textures: Clipped balls of box (Buxus sempervirens) are dotted in a sea of lavender (e.g. Lavandula stoechas subsp. pedunculata). The lavender ‘lawn’ will, when in flower, be a magnet to insects. But the most striking features are certainly the white womblike concrete spheres punctuating the landscaping. There is a touch of Telly-Tubby-or Hobbit-Land there and they are an interesting feature to look at from above – but they are not only meant to be a decoration: The aim is to provide a garden which would encourage inhabitants to actually leave their apartments and enjoy a contemporary outdoor space for play and relaxation, but also for work!

This was a new trend at the 2005 Chelsea Flower Show which didn’t feature seeds, plants or flowers; instead involved futuristic pods with built in workstations. With many people already having converted attics and basements to create extra space, garden conversions were tipped to be the next craze. But it is not just a matter of putting a computer in a shed. Many of the shows top gardens displayed ultra modern garden offices built seamlessly into the landscape.

Glass fronts, open sides and removable roofs, plus wireless technology were used so that workers could sit among the foliage. Sponsored by computer companies the gardens are being created to take advantage of the increasing number of employees opting for flexible hours or working from home full time. Working outside had always been favoured by writers -George Bernard Shaw, Dylan Thomas, Roald Dahl and Philip Pullman produced great work from their gardens -but now it is taking off across a range of professions. For this reason Gavin’s showpiece in Chelsea included a white pod office fitted with an Apple Mac. According to Diarmuid Gavin;

“(…) this is happening everywhere now and it is not a trend driven by designers. It is being driven by those working at home!”

The Hanover Quay Garden is the first example the designer proposed for a communal space and it is to show developers what can be done.

The garden was sponsored by Park Developments and Sisk.

In his original design Gavin also proposed that residents could be given their own plots to cultivate as they choose. This concept wasn’t carried through in the final set-up at Hanover Quay. Instead a children’s play-area was added to the design to give an extra amenity to the children living in the surrounding apartments.